The Morality Ambiguity of Fallout 3 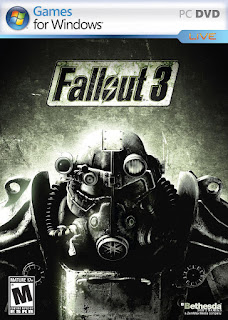 I'm a huge fan of Fallout 3 and consider it five or six on my favorite video games of all time. It's not the game doesn't have flaws, it's just that I love the hybrid shooter-RPG's atmosphere and world-building. Nothing is more interesting than traveling around the wasteland, exploring, and shooting Deathclaws or Enclave.

However, one of the things which has always bugged me is the criticism of the game which focuses on the black and white conflict between the Enclave and the Brotherhood of Steel. They claim the latter is treated as a group of white knights and heroes when they were previously a more ambiguous faction. I actually think the faction is a lot more nuanced than that or, if they were written as heroes, they're actually of a very dubious sort.

What is the Brotherhood of Steel, you ask? Well if you don't know, you're probably not a fan of Fallout. Imagine a group of guys dressed up like Iron Man who can't fly but carry huge plasma rifles and wander through the Wasteland, killing monsters. Virtually every game has the player character either as a member of the organization or possessing the option for joining them. Only Fallout 2, I believe, has its main character never become a member. Instead, the Brotherhood just sort of watchs his actions and cryptically comments on them.

The Brotherhood of Steel was never meant to be the good-guy faction of Fallout. They're actually a collection of morally ambiguous isolationists who, aside from the player character, don't associate with outsiders and don't do anything constructive. Far from going out into the Wasteland to right wrongs or fight mutants, the Brotherhood is supposed to have the mission of gathering technology from the Pre-War era. The Brotherhood, then, sits on it. They don't attempt to use it to rebuild humanity or anything constructive, they're only supposed to keep it from the hands of 'savages.'

I.e anyone not them.

This changed in Fallout: Tactics where the Mid-Western Brotherhood (to differentiate it from the one in California) had the option of becoming the pioneers of a new civilization in the Chicago area. We'll ignore Fallout: Brotherhood of Steel because of the circumstances of its publication and ill-reception have resulted in Bethesda declaring it non-canon but that game continued the trend of the Brothers ignoring their mission in order to bring order to the Wasteland.

Then there was Fallout 3.

Fallout 3 is the most controversial game in the franchise with fans disagreeing violently over whether it was the best thing ever or the worst. Personally, I think it rescued the franchise from dying a slow-death and allowed the even-better Fallout: New Vegas to be created. One of the controversial elements to the game, however, was the use of the Brotherhood of Steel as the Ultimate Goods-GuysTM of the setting.

In the game, your player ends up more or less conscripted into the Brotherhood of Steel towards the end. The character of Elder Lyons is depicted as a saintly Obi-Wan Kenobi type who leads the player characters to smash the evil Nazi-like Enclave and deliver fresh-water to the impoverished people of the Capital Wasteland. You can betray his trust and annihilate the East Coast Brotherhood of Steel towards the end but there's no reason to do this other than your character is a massive [censored]. Heck, the Broken Steel DLC implies his cute warrior-girl daughter has a crush on you if male.

Compared to the more nuanced depiction of the Brotherhood of Steel in Fallout: New Vegas, a lot of people have complained about the East Coast Brotherhood's depiction. They claim they are goody-two-shoes inappropriate to the Wasteland or traitors to the original concept. Fans have even gone so far as to state their preference for the Brotherhood's rivals in the Brotherhood Outcasts, a group of ex-Brotherhood members who seem to only exist for the purpose of insulting your character when encountered.

In truth, I think Fallout 3 nicely re-introduces a lot of the controversies of the original Brotherhood of Steel while laying the groundwork for the organization's implied eventual collapse in Fallout: New Vegas to have meaning. I also think Elder Lyons and the Capital Wasteland Brotherhood have a great deal more moral ambiguity than fans might realize. The touches are small but deliberate, highlighting the group isn't quite such a paragon of virtue as might be thought.

Don't get me wrong, I think Bethesda meant for the Brotherhood of Steel to be a positive organization in Fallout 3 but I think its depiction is deliberately tragic. They invoke Arthurian imagery all over the place, including Elder Lyons serving as a Merlin-like figure for the boy Arthur Maxson, who is heir to the Brotherhood of Steel's founder. The Brotherhood has abandoned strict interpretation of their code for a more humanitarian one, believing they should protect the innocent and allow volunteers to join their society instead of isolating themselves.

This sounds all well and good but by the time you actually encounter Elder Lyons and his crew, they're a crumbling remnant of their former selves. Half of the organization has abandoned Elder Lyons, becoming the Brotherhood Outcasts, while an unknown number of its members have perished in a lengthy war against the Capital Wasteland's Super Mutants. The Brotherhood is still alive but only because of the recruits they 'acquired' in one of the more questionable actions in the series. In short, Bethesda has the protagonist of the game join a Camelot on its last legs.

This isn't necessarily a bad thing. After all, bad leadership does not mean moral ambiguity. Besides, everything can potentially work out for the Brotherhood in the end depending on the actions of the player character. You can defeat the Enclave, destroy the Super-Mutants, get the Brotherhood an Air Force base full of Pre-War technology, and even give them access to a Holy Grail of life-giving clean water in the radioactive desert that the Capital Wasteland has become. All's well that ends well.

One of the most delightfully subversive elements of Fallout 3 is its awareness of symbolism and the dangers of nostalgia. Fallout has always mocked 1950s utopianism, treating it as the racist fear-mongering time it was. However, Fallout 3 took this ball and ran with it. Everywhere in the Capital Wasteland are reminders of how backwards thinking and stasis resulted in the human race destroying itself.

Yet, at the end of the game, you've given the Brotherhood of Steel effective control over the Capital Wasteland. The ending of the main part of the campaign was a conflict over, not whether the water purifier Maguffin of the game would be used, but who would control it. Both sides intend to use the resulting water as a form of bribery, trading it and military protection for fealty. The Brotherhood of Steel is just more nice about it. In short, your great accomplishment is re-introducing feudalism to the heart of America.

The Brotherhood of Steel's ownership of the Purifier and plan to use it to "help" the Wastelanders is something the Lone Wanderer supports in a good karma ending but even in the game, it is questionable if it is a good thing. Madison Li, a far more intelligent woman than most wastelanders, strongly dislikes the Brotherhood's unilateral control over the device. If the Enclave had approached her with an offer to "protect" her as the Brotherhood did, the ending of the game could very well have been a reversal of events with no changes.

Indeed, the Brotherhood of Steel and Enclave are mirror images of each other in Fallout 3. Both want to rule the Capital Wasteland in order to "protect" its citizens. At least the Enclave forces under Colonel Autumn, who make a poor showing of convincing the Lone Wanderer and James to support them. Had Colonel Autumn better people skills then he might have actually been able to come to an accommodation with the family from Vault 101.

The DLC known as The Pitt can take this one step further. Your character can discover Elder Lyons "scoured" a city of degenerates clean of virtually all-life and one of his paladins stayed behind to keep order. Said paladin became infatuated with the idea of restoring civilization and reintroduces slavery in order to rebuild the city of Pittsburgh. You have the option of overthrowing him and taking his place, making yourself a King in the Wasteland.

Indeed, Elder Lyons has a history of serving as a somewhat condescending imperialist to the Capital Wasteland. Not only does he unilaterally seize control over the most precious resource in the Commonwealth (the Purifer) but he also proceeds to dictate how it is distributed to the public. When he encountered the Pitt, Elder Lyons slaughtered the entirety of the population there out of a sense of disgust for their mutated savage ways. The "cleansing" of the Pitt reminds me, in retrospect of Mister House doing the same to Freeside.

Given the Brotherhood of Steel under Elder Lyons self-righteously destroyed the people of the Pitt for their offensive morality (one brought about due to circumstances beyond their control due to the toxins the environment), kidnapped their children (except for the mutated ones), and has his men take pot-shots at ghouls for their deformities - they're not really nearly as nice a bunch as they might initially appear. Worse, they're people who believe their actions are absolutely justified. There's nothing more dangerous than a self-righteous crusader IMHO.

Food for thought.
Posted by CTPhipps at 3:15 AM