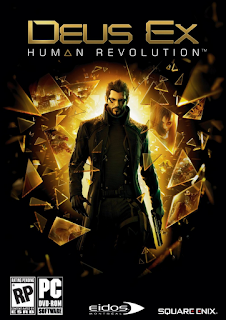 Warning - this review will contain spoilers for the ending of Deus Ex: Human Revolution.

The cyberpunk genre was created by William Gibson with the 1984 novel, Neuromancer. The punk influences talked about how technology was transformed into a tool of oppression rather than liberation while the cyber elements predicted a net-controlled world where cybernetics were a part of daily life.  Eventually, people ran with cyberpunk and produced animes like Bubblegum Crisis and movies like Robocop.

I went back and forth on whether or not Deus Ex: Human Revolution fell into the category of true cyberpunk (the world screwed by technology) or post-cyberpunk (containing elements thereof but going in a different direction). In the end, I'm tentatively putting it in the category of true cyberpunk while its predecessors (Deus Ex, Deus Ex: Invisible War) are post-cyberpunk. In a way, Deus Ex: Human Revolution is a reconstruction of many discredited tropes like the evil megacorporation and cybernetics make you evil.

Unlike Batman: Arkham Asylum, which I felt had a obviously strong satirical message, I wasn't sure whether or not Deus Ex: Human Revolution worked as an allegory. After all, Augments are still very far away and aren't really a good stand-in for an existing problem like the X-men's mutants and racism. Then I thought about it for awhile and realized Deus Ex's central conflicts over augments and the proliferation thereof was an excellent stand-in for questions over wealth disparity.

One of the biggest issues of the 2008 Presidential election was the housing-induced financial collapse. It helped expose the fragile peace which exists between the ultra-wealthy and the ever-increasing ranks of America's poor. In the USA, politicians can be bought (always have been), and when the ultra-rich can buy politicians then they can make the laws. As a result, to keep people in line, the wealthy have to keep the impoverished oppressed or focused on other matters.

In the Deus Ex franchise, the embodiment of 'The Man' is the Illuminati. In the first and second games, the Illuminati were morally ambiguous and depicted as a valid choice for guiding humanity's destiny. In Deus Ex: Human Revolution, the Illuminati are simply a collection of people out for their own power. Like many real-world corporates, they are willing to manipulate the law in order to generate a better pay day for themselves. Bob Page, central villain of Deus Ex 1, had arguably better motivations in that he wanted to make a paradise. It was just on the back of poor peoples' corpses.

The most visible figure of the Illuminati is William Taggart. William is a stereotypical televangelist-esque demagogue who is preaching against the cause of Augmentations under the guise of them being unnatural. For a long time, I wondered why they felt the religious right would be against augmentations. I felt it was a blatant pandering to the secular leaning nature of video gamers. After all, what is an easier target than televangelism? Then, at the end, it was revealed William Taggart was a member of the Illuminati and really only wanted to prevent the proliferation of augments across the world.

In short, William Taggart is an enormous hypocrite. He uses the religious inclinations of his audience to lead them down whatever road he chooses. It's questionable whether he has any real opinion on Augments whatsoever, save the possibility they might eventually threaten the Illuminati. American politics is filled with rabble rousing by both parties, drawing on their members' prejudices advance their agendas. Like race-baiting, homophobia, and innumerable pet causes; the emotion is what's important. As long as people are angry and distracted, they aren't thinking clearly.

Underneath William Taggert is Purity First, a anti-augment terrorist group. Unlike what you'd expect, Purity First doesn't appear to be controlled by the Illuminati. Instead, it's a form of blow back. William Taggart preaches nonsensical diatribes against cybernetics but his followers passionately believe in his so-called points.

Isaias Sandoval, Taggart's assistant, truly believes in the evils of augmentation. Isaias assists the Illuminati in numerous terrorist actions but also carries out his own plans to fight for a cause William Taggart cares nothing for. It makes him a fool and, worse, shows how many people the Illuminati are willing to sacrifice as part of their endless power games.

Deconstructing the evil corporate mogul archetypes are David Sarif and Zhao Yun Ru. Zhao Yun Ru is a more typical evil corporate mogul than David Sarif. She lies, kills, murders, and manipulates her way across the game. Hell, she's even the final boss in the game. However, it's actually her financial activities (which you can read about in e-mails) that are the most interesting.

Zhao Yun Ru engages in all manner of horrible, but plausible, business practices to make sure augmented people need constant maintenance from her company. If you think this is unlikely from a company which produces prosthesis, maybe you should read up on many real-life medical corporations. She produces crap cybernetics and depends on it breaking down in order to force people to buy new models, despite the fact the machinery is built directly into customer's bodies.

David Sarif, by contrast, is as close to a benevolent cyberpunk corporate mogul as possible. Unlike many real-life corporate moguls would do, he actually researches ways to make one of his most profitable production lines obsolete. Specifically, the drug neuropozyne. Likewise, he refuses membership in the Illuminati despite the limitless power and wealth it would give him. David even attempts to rebuild the devastated economy of 2020s Detroit, despite it being out of his price range.

David is still corrupt, however. In order to make sure his dream of a cybernetically enhanced future is realized, he insists on Adam Jensen's involuntary upgrade. Likewise, he makes use of Adam's DNA information despite the fact that it was obtained without his consent. Throughout the game, he uses Adam Jensen as his personal hit-man and even attempts to frame William Taggart for terrorism (despite the bad writing about what, exactly, you're doing).

Indeed, the most damning anti-augmentation argument is ever-present in the game but never overt. No one directly references it but it coats everything. Specifically, that augmentation is great and all but only the very rich will be able to afford it. David Sarif spends billions on his goal of creating the best augmentations possible but he's doing so in a city filled with decaying slums. The selfishness of transhumanist ideals in a world where there are very real human problems is an interesting juxtaposition. A similar theme is explored in Ghost in the Shell 2.

While the writers seem to come down squarely on the side of augmentation in the game, the truth is that the issue is portrayed more ambiguously than I suspect even they planned. With obvious suffering and an ever-growing gap between the poor and the wealthy, augmentation seems an indulgence of the super-rich that will do nothing to alleviate the problems of day-to-day life. David Sarif, for all his lofty claims of being a visionary meant to lead us into the light (making him, amusingly, much like the reformed Illuminati of Deus Ex 1), is the kind of man who doesn't really 'see' the problems of the destitute.

It's a kind of Fridge Brilliance (see TVtropes.org) moment when you realize that a substantial portion of the game deals with the problems of regular people. Adam Jensen has the opportunity to defy stereotype and use his augmentations to fight gang members, bust crooked cops, help hookers, crush white slavers, and smack around drug dealers. Whereas many players, myself included, initially wondered why this was included - you realize it shows the fundamental difference of Adam from other augments. He's the kind of man who believes great power shouldn't be used to achieve more great power, however benignly, but to assist those who don't have it.

There are other interesting ideas in Deus Ex: Human Revolution, such as the expanded military role of private contractors and extraordinary rendition but I'll talk more about that in my review of Deus Ex: Missing Link. Overall, I really like the social satire in the game, it's just subtler than I expected.

Excellent work, developers.
Posted by CTPhipps at 1:23 AM