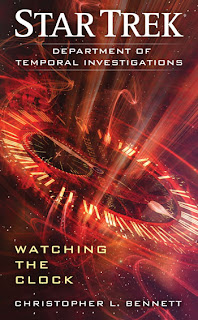 Star Trek: Department of Temporal Investigations: Watching the Clock is a Star Trek novel by Christopher L. Bennett. My first thought: its title is a bit of a mouthful. My second is: Goody-goody! Time Travel! I love time travel!

For the uninitiated, the Department of Temporal Investigations was introduced in the Star Trek: Deep Space Nine episode "Trials and Tribble-ations."  Someone in the writing room must have noticed that with the literally dozens of time-travel related plots in Star Trek, there had to be someone whose job it was to deal with their aftermath.

Agents Lucsly and Dulmur, named after the primary X-files protagonists, pretty much scour the Federation for time-travel occurrences and oddball scientific tech to prevent the past from being altered. This book is more or less impenetrable to non-Trekkies because it references elements from all across the many Star Trek series and movies. It furthermore includes elements from the Star Trek novels, so if you haven't read Star Trek: Destiny (like me) you might be as lost as anyone else. The references range from the famous, like the Guardian of Forever from "City on the Edge of Forever" to the obscure. For example, a minor character from the episode "The Neutral Zone" plays a starring role.

Still, I'm enough of a fan to have gotten the majority of the references even if I have very little experience with the Star Trek: Expanded Universe. Christopher Bennet is nice enough to explain everything away, so it wasn't really necessary to have recently seen the episodes he referenced. Which is good since the last time I saw "The Neutral Zone" was when it was on the air twenty-two years ago.

Surprisingly, he improves on the characters in many places. Clare Raymond, the aforementioned character from "The Neutral Zone", was nothing more than a caricature in the episode she was introduced but comes alive as an outsider's perspective to the United Federation of Planets. A human woman from the 1980s, she basically gets to talk about how much society has changed from an era not too far removed from our own.

It's all well and good to be told it's a utopia to viewers every week, but Clare Raymond nicely illustrates what a culture shock it must be for someone in the 1980s to be confronted with a world utterly lacking in nationalism, sexism, crime,pollution, and homophobia. Star Trek doesn't have the best track record in handling gay issues but Christopher Bennett tries to make up for that. Much like in Battlestar Galactica (2nd version), it's a complete non-issue in the 24th century.

The book is mostly made of short-stories dealing with the various temporal loose-ends leftover from the shows. There's the USS Bozeman, which is a ship from Captain Kirk's time, and what exactly was to be done about Captain Janeway after she violated the "Temporal Prime Directive" several dozen times in the Star Trek: Voyager finale. For the most part, all of these incidents were highly entertaining. Though, frankly, I would have liked some follow-up on the USS Bozeman incident since I really bonded with those characters.

The primary protagonists of the book, though by no means the only ones, are Agents Lucsly and Dulmur and we get to know them extremely well over the course of the book. Lucsly is the skeptic of the two, basically having a near-religious devotion to the idea of a "true" timeline un-tampered with by time-travelers. Dulmur is the more likable of the two, basically being a Joe Friday sort of character who treats temporal crime as just another job.

Frankly, I think Lucsly came off as a bit of a lunatic in the book. This is ironic because he's meant to be the more sensible of the two. The very nature of relativity means that ANY faster than light travel is going to involve time-travel of one sort or another with Star Trek being the only series to really treat the idea with as much prevalence as it would have. So Lucsly's belief that the "true history" must be protected at the expense of the present is just nonsensical.

There's also an odd attitude that everyone "Uptime" automatically has authority over temporal matters versus people in the current timeline. This is ridiculous because people up-time do not necessarily exist except as possibilities. In my opinion, giving them authority is a bit like handing over things to Kang the Conqueror or Apocalypse since they MIGHT eventually rule the future. It's more of Lucsly's belief there's one "true timeline" that the book goes to great lengths to illustrate is just ridiculous. Hell, Christopher Bennet devotes at least one chapter to talking about how Lucsly's view is erroneous.

One bit I really appreciated was the level of detail given to "real science." Star Trek passed the point where hard science was replaced by magic pretty early in the original series. About the time the Talosians showed up, I think.

(Give yourself a geek point if you get the joke in that sentence.)

Still, sometimes, I think Star Trek doesn't even try to justify itself. Doctor Who can get away with it because that's what Doctor Who is all about. I get A LITTLE annoyed by it in Star Trek because Star Trek science is supposed to mean something.

Christopher L. Bennett gives a lot of attention to real ideas in quantum physics, which helps make sense (of a sort) out of the wide variety of oddball ways Star Trek time-travel functions. I'm not sure he really needed to try quite so hard as he does in this book but I appreciate the effort.

Overall, I was very impressed by this book and very much enjoyed it. If Christopher Bennett were to make this a regular series I would definitely buy it. The characters were interesting, the plots entertaining, and it tackled large science-fiction ideas. Which is what I expect/want from Star Trek.