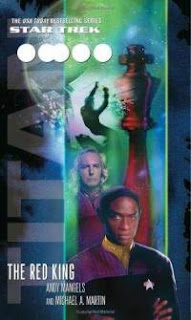 Star Trek: Titan: The Red King by Michael A. Martin & Andy Mangels is the second book of the series. Continuing directly off from Taking Wing, it follows Captain William T. Riker and his wife Ambassador Deanna Troi as they continue their exploration of universe with the crew of the U.S.S Titan.

The premise of the Titan series is that Captain Riker and his wife are being sent on essentially the same mission as Captain James T. Kirk. They're taking their Luna-class starship out into the reaches of space to boldly go where no man (or woman) has gone before. Part of the humor of last book derived from the fact they were hijacked from this mission to help with the Romulan government's rebuilding.

They get hijacked from this mission again, no spoilers, fairly early in this book. However, it does nicely settle our heroes back down in the usual Star Trek pattern of exploration. They encounter a new civilization (or semi-new since the one featured in this book was apparently introduced in a previous novel), discover a crisis, and basically have to deal with all the fallout from this crisis.

What changes in this book is that the nature of a novel means that there's no limit to the "budget" that the authors can work with. As a result, the events depicted are staggeringly more epic and grandiose than Captain Kirk usually had to deal with. Well, maybe not Captain Kirk, he often had to deal with planet-eating monsters and worse. Ditto Picard. Okay, Sisko too. Never mind, bad example. What's important is that a lot of stuff happens that we could never see on screen.

Likewise, the novel is a great deal darker than the usual Star Trek fair. Not dark like Troi's unnecessary rape in Star Trek: Nemesis but dark like massive disasters occurring. I'm not a big fan of portraying huge tragedies in space opera as being less important than the individual ones. Alderaan blowing up is a billion times bigger disaster than Obi Wan Kenobi, no matter how much I like Sir Alec Guinness' portrayal.

One of the things I like about Star Trek is the fundamental optimism of Roddenberry's vision. I actually disliked it in Star Trek: Voyager when they left Vidiian space without curing the Phage. As an adolescent, I assumed that the natural end to the Vidiian storyline would be the crew saving their enemies because that's what Star Trek heroes do. When the crew abandoned the Vidiians to a horrific, if well-earned, fate I was left nonplussed.

Here, Riker is largely powerless against the kind of events he's arrayed against and must really struggle to achieve any lasting result. Indeed, futility and the struggle against overwhelming despair is a major theme of the book. In the end, it affected my overall enjoyment because I get enough darkness in my day-to-day life that I'd rather avoid it in my Star Trek. One of the reasons I quit reading Star Wars books is I couldn't stand how gritty and "realistic" they'd made the series after the New Jedi Order.

Ironically, some of the lightest fair in the book comes from the interaction between Commander Donatra and the Klingons. The Romulans and the Klingons were ostensibly allies in the original Star Trek series but quickly became mortal enemies in Star Trek: The Next Generation. Here, there's a great deal of humor derived from the utter loathing the two groups have for one another. I hope Commander Donatra continues to play a role in the series because she never ceases to entertain.

Despite this book being about Captain Riker and his wife, the real stars of the story are Admiral Leonard James Akaar and Tuvok. The two of them were said to have had a long-lasting friendship in the previous Titan novel only for it to have fallen apart over an unexplained event in their past. Here, we discover the root of that conflict and see how the two react to having it once more shoved in their faces. This is, by far, the most compelling plot thread of the book.

I'm only familiar with Admiral Akaar from the previous novel and a short cameo he made in Star Trek: Online. However, the book indicates he's a much better established character in the Star Trek Expanded Universe than I would know about. In a way, he's sort of an anti-Vulcan, embracing cultural passion and emotional displays at the expense of logic.

Oddly, it makes his friendship with Tuvok all the more believable to me.

Tuvok, on the other hand, gets a chance to shine as part of the U.S.S Titan cast that he never really got to do as part of Voyager. I salute the authors for making use of a much-underused character in a way that makes sense and is interesting.

Overall, I enjoyed the book, though not as much as Taking Wing. The relentless darkness of the tragedies the crew have to deal with along with the inability of the heroes to have a meaningful effect on it undercut my appreciation. The character interaction is fine, even if I didn't find it particularly ground-breaking.

As a result, I'm going to have to give the book a 6.5 out of 10. The extra .5 comes from the amusement I derived from Commander Donatra and the Klingons.
Posted by CTPhipps at 6:40 PM