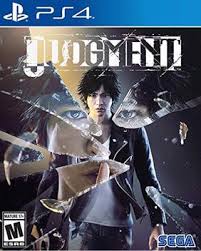 The Yakuza series is one of my all time favorite ones in video gaming. This is due to the fact that I am a aging geek and admit to wanting some more works that are written toward the gritty crime drama sort of things than punching out aliens. So, of course, I love a series that includes things like a bunch of brawling men dressed as babies and other wackiness. Okay, okay, the Yakuza series is one with a somewhat bizarrely disjointed tone. The central storyline is usually a gritty Godfather-esque tale of love, honor, revenge, and betrayal that feeds into a greater conspiracy while the subplots are often humorous to the point of ridiculousness.

Judgment isn't technically a Yakuza game. It's actually a side story that takes place in the same world as the other games, a heavily fictionalized version of Tokyo's red light district called Kamurocho. The premise this time is you are disgraced lawyer Takayuki Yagami. Three years earlier, Yagami successfully defended a murder suspect only to have said suspect murder his girlfriend a week later. Understandably disillusioned with the legal profession, he's since taken up being a private detective in order to make ends meet.

I really like Yagami as a character as he's a nice contrast to Kazuma Kiryu. Collecting money for the Yakuza as a way to make ends meet, he feels like a slightly more morally flexible protagonist even if it's just at the start of the game. He differentiates himself from Kiryu in his moveset as well, being a more Jackie Chan-esque speedy fighter than Kiryu's hard-ass brawler. He's also more personable with options to two-time his various girlfriends as well as use a lot more guile than the Dragon of Dojima ever did.

Yagami's life gets complicated again when he becomes tied-up with a serial killer murdering Yakuza around the neighborhood. The police, not interested in conducting a thorough investigation, arrest Yagami's old associate Hamura and it is up to our antihero to prove him innocent. Except, Hamura is a piece of garbage and possibly tied up with the serial killer. This leads to a complicated plot involving Alzheimers, medical fraud, and real estate. Oh, and as always, it's also tied to Japanese organized crime.

Yagami also a much broader cast of friends and associates with it actually weaponized in the game system. In order to get certain side-missions as well as achieve 100% completion, Yagami must perform various tasks for all of the citizens of Kamurocho in order to build up trust. This is effectively advertising for his business and gets people to spread the word. I also feel it helps the immersion as Yagami has a reason to odd jobs for the people around town. It's literally his job as they pay him to do things unlike Kiryu, who just does them because he's an emotional pushover.

The cast of supporting characters is also much broader with Yagami's partner Kaito, his law firm, and even the antagonists are all three-dimensional characters that feel deeper than the typical ones in this series. I feel like the wackiness and focus on "honor" and "loyalty" of the main saga were toned down here enough that it feels more grounded. It's not without its humor or even wackiness but I feel it strikes a better balance.

The majority of the game consists of a beat-em-up combat system that is similar to the other Yakuza games but with a greater focus on stunt moves. You have two fighting styles with Tiger as well as Crane as well as a dozen or more moves that you can buy. You can also focus on improving general abilities with skill points. I happen to like this as you can develop Yagami's fighting style as you see fit.

Judgment is beautiful and the Kamurocho inside of it is the most loveliest iteration of the region yet. Given that it is roughly the same map as in seven separate Yakuza games, it's amazing how they've mixed the familiar with the new. The NPCs feel more alive, too, and they bustle around town as well as participate in all manner of activities. The usual subquests are present along with the ones you can get from your legal agency and detective agency. However, I should note there's also some interesting new ones like a Virtual Reality game that provides huge amounts of money for our protagonist if he can get enough passes. This is probably the most unique addition to the game among darts, UFO catchers, karaoke, and other activities.

Really, though, I have to say that the plot is the best part of the game. The way things move from the relatively simple serial killer plot to an all-consuming government conspiracy that ties into real Japanese issues is organic as well as entertaining. They also incorporate an investigation, interrogation, and legal scenes that seem equal parts L.A. Noire as well as Phoenix Wright. In the end, everyone's motivations make sense and work perfectly within the setting.

Should you buy this? Yes, absolutely. It's a great introduction to the setting and doesn't require any prior familiarity with the series to enjoy it. I think it's a game that everyone will enjoy with the slightest interest in crime drama. The game also comes with a English dub and it's pretty fantastic. I actually tried them both out during the game and think they're of equal quality. Really, my only complaint is you couldn't romance Saori. If she was a Goth as well as dark and serious, I'd have video game married her.