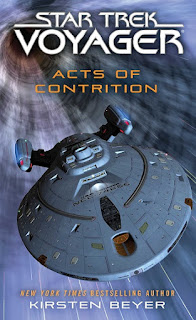 Star Trek: Voyager is a series with an interesting relationship to my teenage years. It's probably my second-to-least favorite Star Trek but I know all of the cast intimately and was invested in their quest to get home. If I had to explain it in simple terms, I probably liked the cast of Voyager more than anyone else save the Original Series' crew but they had really bad plots. Some really good ones too, mind you, but not so much to balance things out.

As such, I was interested in the Voyager novel relaunch more than the other stories. Taking the crew into a situation different from their travels across the Delta Quadrant was an intriguing prospect. I was curious to see how the various crew members dealt with with the changes in their absence. The Maquis had been destroyed, the Dominion War had created a harsher Federation, and technology had advanced that a return trip to the Delta Quadrant was feasible.

Acts of Contrition picks up after a number of these events, including the death and resurrection of Captain Janeway, with a new mission to the Delta Quadrant in order to investigate if there's any remnant of the Borg. Along the way, they have encountered a powerful species called the Confederacy which may be the Federation's most powerful allies ever but who have powerful differences of opinion on how to treat their citizens.

Meanwhile, a plague is ravaging the Federation which appears to be based on the Caeliar (the species which created the Borg) nanotechnology. Despite the Federation's best minds working on it, there's no sign of any progress so Seven of Nine goes to investigate. The fact one of her old lovers is being held under house arrest by its scientists makes the mission doubly important despite the fact she's currently with another.

Finally, in a break from the usual Star Trek plots, we have a custody case in the future. Having been lied to by her son about his wife and daughter's death (to protect them from a Klingon cult), Tom Paris' mother is suing for custody of his child. This, despite the fact said child has shown no sign of physical danger at their hands, is provided for adequately, and is deeply attached to her parents. The Federation treats this suit seriously, though, which makes me wonder what sort of standards they hold parents to and whether or not Tom and B'Elanna be better off raising their daughter in the Delta Quadrant.

I must confess, I'm reading this out of order because I was intrigued by the Tom Paris plot. I'm a sucker for seeing things I haven't seen before in Star Trek and was interested in what custody hearings would be like in the 24th century. The depiction isn't terribly encouraging because it's clear Julia Paris is using the court as a method of getting revenge on her son for deceiving her with Miral Paris as a pawn.

If there was any evidence of mental abuse in one of the parties then that would qualify right there. She doesn't even bring up the dangerous life of a Starfleet child or the murder-cult, which further hardened my opinion against her. The fact Tom isn't more angry at his mother struck me as the only thing unrealistic about the proceeding, though, as I've seen many otherwise stable family relationships destroyed by much less in real-life.

The lion's share of the book, though, is devoted to the discussion of the Confederacy and whether or not it can ever reach an accord with the Federation. This is notable only because the Confederacy is, well, the present-day United States IN SPAAACCCE. It's a government ruled by capitalism, few safety nets, religious dogma, poor health care, and manipulation of the government by corporations.

The Confederacy is a bit worse in some respects as there's, thankfully, some safety net in the United States despite attempts by certain parties to eradicate them. Instead, the Confederacy reminds me a bit of Bioshock's Rapture where concepts of wealth=deserving to be wealthy are foundational principles.

I'd like to think that was a concept too stupid to make much traction but the Prosperity Gospel exists so what do I know. There are many people who have worked to be rich, many people who have inherited money, and many people who make their fortunes through illicit means. Watching the post-scarcity socialist Federation try to comprehend a mindset like this is an interesting experience.

Honestly, I think the book overdoes the Federation's troubles with the Confederacy since they're allied with the Klingons who are a violent oligarchy as well as the Ferengi who are built on capitalism despite Rom's reforms. Hell, you'd think the Federation would be used to making alliances with people they don't share the values of in order to enact positive change by example. The characters sometimes act as if the culture were the most surreal and callous one they've ever encountered.

Overall, I'd liked Acts of Contrition and would recommend it to Voyager fans. I'll buy just about anything with Seven of Nine, the Doctor, Tom Paris, or B'elanna in it. I also think this is a story which goes in an interesting direction with some fairly pointed social satire. It's got some flaws and I think the Seven story could have gone faster but, overall, I give it two thumbs up.