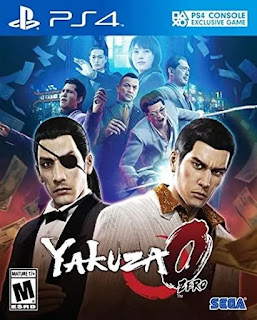 I have an absurd fondness for the Yakuza series and they have rapidly moved up my list to being among my favorite video game series. Part of this is the fact that they are adult crime novels, silliness aside, with probably the most serious plots you're going to find in video games. I really loved the Kiwami games for tapping into this with stories about murder, blackmail, revenge killings, and the complicated politics of Japanese crime syndicates. I mean, yes, this includes absolutely bananas subplots where you deal with the wacky residents of Kamurocho.

Yakuza 0 is a prequel to the initial series and a game you should play either first or third, IMHO. If you are interested in jumping into the series, I tend to be think you should either start here or Yakuza Kiwami. I might add the possibility of joining with Judgement but I'm inclined to think that may be a bit too advanced to then go back to the older games following. Either way, I play these games primarily for the gritty crime drama. I just enjoy the sidequests and activities as a supplement to the main story.

The actual crime drama story is that series protagonist, Kazuma Kiryu, is a new recruit to the Tojo Clan and not too happy about having to do his first beat-down of a deadbeat for a loan shark. It's the 1980s and the height of the Japanese Bubble Economy. Everyone seems to be rich and is eager to spend lots of cash on women, wine, plus other entertainment. However, Kiryu finds himself framed for the murder of his victim and is soon kicked out of the Tojo Clan. This is part of a larger attempt to discredit his adoptive father, Kazama, and kick him out of the Yakuza too. Key to both clearing his name and also thwarting the people involved is a patch of land called the Empty Lot, that is the key to making trillions of yen in an enormous construction project.

Over in Sotenbori, Goro Majima is also kicked out of the Yakuza. Forced to serve as a manager for a high class cabaret, he's actually made himself a respected local businessman. It is secretly hell for him and he would do anything to get himself back into the Tojo clan. Irritating him is his Omi Alliance jailer, Sagawa, who clearly has no intention of helping him do so. Majima finds out that he might actually get back into the clan, though, if he does the unthinkable: turns hitman and kills someone for his bosses. What seems to be a straightforward job quickly becomes an enormous clusterfuck and he's soon wrapped up in a plot that ties directly to Kiryu's.

The plot is twisted and full of wonderful character bits but also perhaps a bit too long. Yakuza 0 sort of has the problem of feeling like being a television series that's occasionally interrupted by bouts of gameplay. All of the games have a bit too much in the way of "go here, watch cutscene, go there, watch cutscene" but this seemed especially egregious. However, I can't complain about the plot too much because that's the thing I am here for. It does feel like it could go darker as the protagonists seem awfully reluctant to kill even fellow gangsters but maybe that's a Japan thing.

Either way, I feel like these are some of the strongest characters in the series. Majima has undergone a complete personality overhaul and while it isn't all that similar to the crazy man of the Kiwami games, it's a deep and rich character that I liked getting to know. I enjoyed Kiryu finally acknowledging he's a terrible gangster and probably would have been happier never getting involved in the like. The inclusion of characters like Dojima, Nishikiyama, and Shimano helps expand on their storylines as well as enriches the experience from the earlier games. I also am fond of new characters like Lee, Makoto, Tachibana, and Oda.

All of this is basically a cover for the fact the game itself is rather weak. It's a game that, like the Fallout series, really depends on strong writing to ignore the bad mechanics. Most of the gameplay is a bunch of martial arts beat-em-up encounters that are neither particularly difficult or really engaging. The sidegames like mahjong, darts, pool, bowling, and pocket circuit racing aren't really that fun either. There's two exceptions but the side activities are things I mostly ignored with the exception of the sidequests.

The sidequests are a hilarious collection of short vignettes that feel like they come from an entirely game than the ultra-serious crime drama of the main plot. You can help a guy stand up for himself, help Michael Jackson make a music video with Stephen Spielberg, educate a dominatrix on her job, and other fun little bits of ridiculousness. The two big optional activities, though, are managing a cabaret club and real estate. These actually have their own plots tied to them and are fairly enjoyable. In the end, though, I only played the real estate one to its conclusion because I wasn't really fond of being a manager for a hostess club. They're simple games that aren't really that entertaining but are both decent time-wasters.

A couple of small complaints include the fact that I think the soundtrack is a mistake. It should have been full of 80s Japanese music or Japanese vocal versions of American pop music. I know it was probably a cost issue but hearing dubstep just took me out of the experience. I also felt the game verged on being a little too long. The story reached its climax around 16 and its epilogue was just punchable filler. It also didn't help that several of the bosses were just repeats and got old quickly. One boss, Kuze, was intimidating for the first two battles but you end up fighting him five times with no change in his attacks. 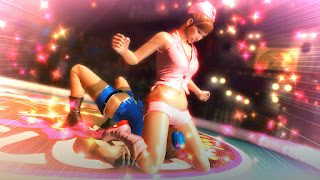 I admit to feeling a bit conflicted also about the game's handling of the fairer sex. I feel like any crime drama which doesn't have a healthy dose of sex is missing something essential. However, the softcore porn element to Yakuza 0 goes a bit over the deep end. You can collect cards of real-life models and watch videos of them showing off their bikini-clad bodies as one activity. There's also CGI fighting girl games where they're all dressed as strippers while you bet on catfights. That's in addition to the telephone mini-game of shooting come-on lines to girls in order to get them to sleep with you. All of this is optional content but a bit overboard, IMHO. I mean, I'm not going to police your fun but this was silly.

In the end, Yakuza 0 is a game almost identical to other ones in the series that really has its story as the only thing going for it. The plotline and characterization manage to elevate an otherwise pedestrian game to something really enjoyable. Kiryu and Majima's epic storyline of revenge, betrayal, honor, love, etcetera etcetera makes the game worthwhile. Even then, it sometimes drags on a bit too much in the cutscenes. The sidequests are decently written but I have no real interest in the activities. Still, I wanted to know what happened to the Empty Lot as well as the supporting characters not seen in future games. That, alone, gets my recommendation.