Harley Quinn and the Birds of Prey review 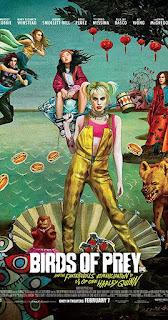 HARLEY QUINN AND THE BIRDS OF PREY is the best movie I've watched this year aside from KNIVES OUT and that was on streaming. Mind you, it's only February and I think this film is far from flawless but this is a film that deserves to succeed. It is easily my favorite of the DCEU except for Wonder Woman and Margot Robbie does a fantastic job in making the kind of zany supervillain adventure that I've made my living writing with the Supervillainy Saga.

Harley Quinn was a big influence on my love of supervillainy tropes and my writing in general. If you have an objection to my citing this, then just move down a few paragraphs and I'll get talking about the movie. I loved her in Batman: The Animated Series when she liberated herself from the Joker in "Harley and Ivy" and continued my enjoyment for her when she showed in the DC comics universe during "No Man's Land." In addition to inspiring Cindy Wachkowski a.k.a Red Riding Hood, she also helped refine the idea of the supervillain protagonist.

Harley has always had an issue, though, which is the fact that she was introduced with the Joker. When the animated series was going goofy and fun with Harley, the comic books were doubling down on the Joker as a disturbing monster clown straight from your nightmares. Harley's love of the Joker seemed incongruous given it's less like falling in love with a colorful but evil criminal and more like falling in love with John Wayne Gacy (a.k.a Pogo the Clown) or Manson.

This actually was a serious flaw for the Suicide Squad because generally the people who like Harley Quinn as a protagonist, like her as someone who gets away from the Joker and becomes her own woman. However, like Supergirl, her origin is intrinsically tied to the Joker's. As such, Suicide Squad had some definite problems with the fact it's about Harley Quinn and yet had to include Jared Leto's Joker that didn't really have room to exist in an already packed storyline. Executives also assumed people liked the Joker/Harley Quinn when, in fact, it is an anti-ship. People love seeing them broken up. I like to think it's the same mistaken attitude that led Thomas Harris to believe people like Clarice Starling and Hannibal Lecter together.

Harley Quinn and the Birds of Prey is a story that gets Harley Quiinn as a character. It is part of why I absolutely loved this movie because it is about the damaged but enjoyable titular character forging her new life post-Joker. It has some flaws due to the premise, which I'll get into later, but these are minor issues. This is a solid film full of action, colorful characters, enjoyable snark, and weird off-the-wall Gotham City kookiness that I enjoyed. Go see this in theaters because it's one of those films that benefits from a huge screen.

The premise is Harley Quinn (Margot Robbie, duh) has broken up with the Joker but is struggling with her lack of respect in the criminal underworld. Feeling like a big statement is the best solution, she blows up Ace Chemicals with a gasoline truck. Now wanted by the entire Gotham City Underworld and GCPD due to the fact she no longer has the Joker's "protection", she ends up involved in a scheme of B-list Batman villains Black Mask (Ewan McGregor) and Victor Szass (Chris Messina).

Apparently, there's a diamond that has been laser-coded with a bunch of Swiss bank accounts and Black Mask wants it but it's been grabbed by pick pocket Cassandra Cain (Ella Jay Basco). Throw in Black Canary (Jurnee Smollett-Bell), Renee Montoya (Rosie Perez), and Huntress (Mary Elizabeth Winstead) and you have a helluva good movie. Sort of.

There's a lot of stupid as hell complaints about this movie like the fact that it's not sexy enough (this is not true by any healthy heterosexual male libido's standards--and undoubtedly some queer ones). They also complain about Black Canary's race change (I actually had more difficulty with the fact Mary Elizabeth Winstead is the least Italian-looking woman I've ever seen). There's also the fact Cassandra Cain is in-name-only which I have to agree with. It's weird because they could have called her Harper Row or even made her Stephanie Brown and it would have made more sense.

Everyone does a great job acting and my biggest regret is that they didn't just call this the Harley Quinn movie because the Birds of Prey play only a minor role in this movie. It's like calling Iron Man 2 the Iron Man and Black Widow movie. Yes, you're technically correct but Harley is the star and the reason you should see it. Margot Robbie plays Harley as a bad person but not an evil one and she's mesmerizing on screen: sexy, funny, relatable, likable, and just terrible all once.

Ewan McGregor's Black Mask is vain, petty, childish, comical, and monstrous in equal measures. It is a "oh, wait, of course he is good at being a supervillain" moment when you stop to remember he was the co-lead in Moulin Rouge. Over-the-top is something he can do quite well. Really, he could have played the Joker and done a fantastic job. It's also a shame that he's unlikely to make a return as an ongoing nemesis.  He's also a much better antagonist to the power levels of the protagonists as the biggest mob boss of Gotham City makes more sense as a foe for Harley Quinn than someone like the Enchantress.

I haven't seen Rosie Perez in much but I liked her grizzled 80s cop movie (lampshaded in the film) vibe as well as the fact she was the only Gotham City official who wasn't a complete screw up. Apparently, Jim Gordon wasn't inclined to fire Steven Williams' Captain Erickson (probably because he killed Jason Voorhees) despite his gross incompetence and probable corruption. Jurnee Smollett-Bell's Black Canary is a bit underdeveloped but I want to see her in future movies. She's also got an amazing voice.

Weirdly, my biggest complaint about this movie is that it has a few too many action sequences. They're wonderfully done but the character of Harley Quinn and her interactions with everyone are enough to carry the movie. I kind of wanted more of her wacky and bizarre life as a citizen in a town that goes from hyper-realistic to haunted amusement park in the space of a few city blocks.

Okay, maybe I have two complaints. One minor issue is that this film really didn't need to be R-rated and if you wonder why I think that's a bad thing, I think it's because Harley has a massive preteen and teenage girl following that parents will be keeping from this movie's box office. This is a colorful and cartoonish film that didn't really need the inserting of such ultraviolence as removing the faces of gangsters as well as a few dozen of the f-bombs dropped. It felt like it was going for edginess for the sake of edginess.

In conclusion, See this movie, you won't regret it. There's great action, great comedy, great style, and a solid soundtrack that almost never misses. The things people liked most about Suicide Squad (Robbie and its jukebox musical status) are replicated here with better stunts as well as writing. The acting is great, the characters are 90% representations, and Gotham City is well-represented. This is just a fun film and deserves to be a huge success.