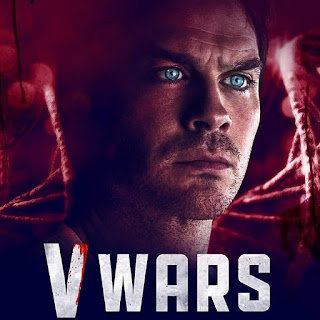 I am a huge fan of vampires. This is something that anyone who knows can confirm. This isn't just because I've written vampire fiction but because I just can't get enough of the hungry undead monsters no matter what their form. I'm not a big fan of romantic vampires, though I make a few exceptions, but prefer the horribly cannibal kind that are genuinely terrifying. So when I heard Ian Somerhalder was going to be doing a horror vampire show, I was stoked. I liked him in Lost, Vampire Diaries (one of my exceptions to disliking romantic vampires), and was eager to see what he would do with this show adapted from the Jonathan Mayberry comic book.

The premise is Doctor Luther Swan (Somerhalder) and his best friend Michael Fayne (Adrian Holmes) are visiting a spot suffering from climate change that defrosts a virus from early in humanity's history. The virus affects the half of humanity that possess the "Predator Gene" that turns them into vampires once they have contact with the virus. Luther is immune to the virus but Michael soon finds himself transforming into a vampire that feeds upon multiple people despite his desire not to kill. The virus rapidly spreads from Michael to dozens of other people and invokes a rapid but heavy-handed government response.

Much of the story is following Luther as he struggles to keep to his pacifistic doctor ideals while the situation continues to deteriorate. The vampires have very little control over their hunger but are, otherwise, innocent victims. The government is eager to round up all of the infected and exterminate them without even bothering to try to find a cure. Meanwhile, several of the infected find a greater community among the "Bloods" than they ever felt among regular humans.

Despite the fact that Michael Fayne is leader of a growing band of undead soldiers, the central antagonist is the US government who is portrayed as only slightly less evil than the bad guys of Wolfenstein: The New Colossus. The fictional Department of Homeland Security analog is staffed with people who routinely violate human rights and plan to murder Doctor Swan well before his antics deserve it. This is also supplemented with a group of human redneck hunters who are slaughtering their way through newly turned vampires with the reluctant help of a Native American tracker.
I think quite a few of the comparisons to real-life racism and government oppression are silly. I mean, really-really silly. Undocumented immigrants are not blood-drinking creatures of the night. Racism against the undead is a very different thing than prejudice against people whose only crime is being a minority. True Blood used these parallels a lot and I've done it sometime in my Straight Outta Fangton books but that's with full knowledge it's a silly as hell parallel.

Part of what I like about this show is the fact that it is a veritible whose who of people involved in supernatural genre shows before. In addition to Ian Somerhalder, we have Laura Vanderoot (Supergirl, Bitten, Smallville) and Somerhalder's real life wife Nikki Reed (Twilight). I hope they continue to do this and maybe somehow get other ex-supernatural show actors to show up. See if Mischa Collins has a week off from Supernatural or something.

The various types of vampires on display is intriguing but underdeveloped with the typical vampire being a savage, wild beast until he feeds only to regain a sense of their former humanity after they are satiated. There are less violent vampires, however, notably that tend to be attractive women but that's genre fiction for you. I understand the comic book develops these into werewolves and other creatures that I hope we get to see more of.

The first season spends almost its entirety setting up the titular "V Wars" and I kind of wonder if they shouldn't have just started with the apocalypse already in full swing because its clear the only reason it happens is because everyone is an idiot.

Quarantining carriers for a cannibalism plague seems like a reasonable assumption as would be getting the entirety of the CDC working on this rather than one pacifist single father. As stated, even if they bombed the vampires, it'd probably be a bit more justified than the show depicts where even isolating the infected is shown as a gross violation of civil liberties. You know, when they're ripping the throats out of people.

My favorite plot of the show is Michael Fayne as he is unwillingly set up as the vampire messiah despite the fact he's probably the most humane of the undead. He's still a killer but that's because his instincts are apparently completely warped by the infection. He's also one of the few who actively fights against it. I can actually believe he and Luther were good friends, even as the show contrives numerous reasons to keep them apart despite their shared desire for a peaceful solution. My least favorite plot is anything to do with Doctor Swann's son who manages to make the story even more ridiculous as he becomes the Chosen One who can save or doom everyone.

I'll be honest, this is a very silly show. Not because it's trying to be silly but because it attempts to be serious and believes its making edgy social commentary despite being a overacted vampire show. This is why I'm recommending it, actually. Too often people think you have to watch good programs that they miss the appeal of a really bad one. The fact Somerhalder is acting his ass off as is everyone else to such a ludicrous premise only adds to the entertainment value. This is definitely a show I recommend but in the context of being cheesy as hell.