The Fall of London (Vampire: The Masquerade) review 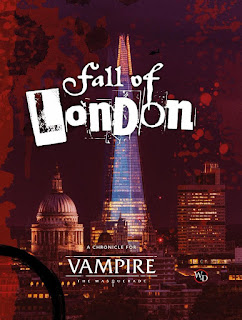 THE FALL OF LONDON for Vampire: The Masquerade 5th Edition is a chronicle that details one of the most important events of the latest edition of the tabletop game: the destruction of every vampire in London at the hands of the Second Inquisition. London has always been one of the pillars of the Camarilla and while very little was actually written up for the city, it was long considered a fan favorite due to its stature in the real world as well as its rulership by 4th generation Methuselah Mithras (the in-universe inspiration for Roman mystery cult god).

The premise is the player characters awaken in London (either pregens or the player characters of the Chronicle) and are forcibly recruited by Mithras to help him regain his former power. Decades ago, Mithras was diablerized (eaten) by a much-weaker vampire and while he was able to possess said vampire due to his titanic strength of will, he lost most of his strength. His loyal toady and lover, Roger de Camden, has prepared a ritual to restore Mithras to his former glory. This ritual requires numerous objects of power and it is up to the player characters to acquire them.

If this plotline sounds familiar, it should as the idea of evil rituals designed to resurrect or restore Dark Lords are a fairly common fantasy plotline. Voldemort is the most famous of contemporary examples but we also have Dracula in Castlevania II: Simon's Quest, Thanos' attempts to gather the Infinity Stones, and the Masks of Nyarlathotep. The big twist here is that the player characters are the Death Eaters than Harry Potter and his crew. London will gradually fall to the Second Inquisition as they work to restore their master, whether they're working for him willingly or not, until the final ritual climax when they might betray or aid the ancient vampire god.

If the players do not choose to use the pre-gens, you're going to have to explain why they should care about serving the interests of a ancient evil vampire. The game doesn't really give too much insight but if their player characters aren't saints, it shouldn't be too hard to convince them. As Benny said in the Mummy, "Better to be at the Devil's side than in his path." Players can be offered power, wealth, and the gratitude of an evil god. They can also have their loved one's threatened or be Dominated into it (which should encourage them on a path of betrayal). Really, you should just make sure everyone is ready to go along with this because otherwise there's no game.

The Second Inquisition has been a controversial topic among fans due to the fact that it moved vampires on the defensive after decades of being treated as the unquestioned secret masters of the world. The fact that mortal hunters, worse, mortal hunters working for the government were able to take out many fan-favorite characters as well as resist vampire subversion rubbed a lot of players the wrong way. It didn't help that real life human conspiracies rarely maintain the level of secrecy or effectiveness that the Second Inquisition was shown to operate under.

The book gives an example of how the Second Inquisition operates and gives examples of characters, equipment, standard operating procedure, plus ways of using them. The Second Inquisition is not invincible or all-knowing. They're also being used by Mithras as a catspaw against his enemies, though even he wildly underestimates just how much damage a well-trained well-funded paramilitary organization can do in the Modern Era.

The book isn't like Diablerie: Mexico or Dialberie: Britain. The scenarios it contrives for the PCs to eventually get all of the nick-nacks they need to restore Mithras are well-designed for a serious Gothic Punk story. There's no raiding tombs here. I also appreciated the fact that the ending allows the player characters to choose to side with Mithras, Queen Anne, betray both to the Second Inquisition, or betray the Second Inquisition to the others after betraying them. You can also just leave the city or try to rule the ashes. It reminds me of the endings of Bloodlines and how those benefited from you being a treacherous monster.

The book retcons the death of Queen Anne Bowesley, so that she actually is able to stay ahead of the hunters even with Mithras helping them. That is, unless the PCs help bring about her end. Really, the book dials back a lot of the flaws of the Second Inquisition as while they're a formidable foe, it's made clear that London wasn't so much "purged" as quite a lot of vampires just left for Birmingham, Edinburgh, or Cardiff until the SI decided to move on. Lots of weaker vampires died but they were never standing there to have a throw down with the hunters in the first place. What do take them for, Sabbat?

The Fall of London is extremely well-done and provides a lot of information for those who are unfamiliar with Mithras or the characters involved. While no substitute for a London sourcebook, it gives enough information on the various power players that you could easily run a campaign set before the Fall. It's also possible to use the book to set a game after the Fall when the vampires start trickling in again after the Newburgh Group (The Knights of Saint George, Arcanum, London police, and MI5) thinks they've won.

The book contains numerous NPCs that help fill out London's vampire rank and file. I was especially fond of Sri Sansa, a former Victorian con man turned Tremere "master of the mystic arts" and Ayse Dhanial who struggles for women's rights while not losing her Muslim faith. The latter was an interesting addition to House Carna. There's also plenty of previously established characters like Mithras, Anne Bowesley, Regina Blake, and Roger Camden. Having them updated makes the book all the more useful for Storytellers.

The book is not presently available but you can read the PDF if you pre-order the hardback copy. Sadly, a PDF copy of the book is not yet available separately. I expect one will become available but probably not for a few months. You have to shell out the big bucks to Modiphus if you want to read about resurrecting Lord Voldemort or not. While I prefer my games to feel a little less arcane, I think it was a really solid work overall and goes a long way to making the Second Inquisition make sense as an antagonist. Now all they need to do is a Chronicle about the Fall of Vienna.

Available for purchase here
Posted by CTPhipps at 10:35 AM