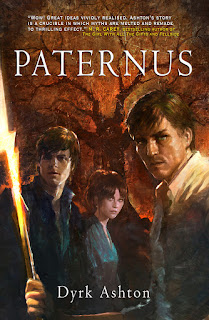 So, basically it's American Gods if it was a action horror movie rather than a whimsical Gaiman-esque road rtrip. This is a compliment to the author because there's a staggering number of mythologies mixed together in this particular oddball stew of Christianity, paganism, Hinduism, and Arthurian lore. Oddly enough, I'm also reminded of Wildstorm's W.I.L.D.C.A.T.S but that's more to show what a strange person I am rather than any influence on Mr. Ashton.

The premise of the book, loosely, is that the Ashura and Deva have been warring for millions of years on our planet. There's the Good Gods and the Bad Gods except the Good Gods are jackases and the Bad Gods are complete monsters so it's more Neutral Gods and Bad Gods. Virtually every deity in human history is one of the First Born children of Father, the Sky-Father of all mythologies, and most of them have multiple guises among various cultures.

Two times, the Bad Gods have risen, only to get themselves slaughtered but weakened the Neutral Gods significantly until they're now a shadow of their former selves. Oh and Father is senile, frequently going into decades or even centuries-long comas due to being a utterly mad god. In a scene which I suspect is a subtle nod to Kevin Smith's Dogma, a pair of teenagers find Father comatose in an assisted living facility and help rouse him just as the next slaughter is about to begin with the Bad Gods having raised just about everyone in their ranks from the former two wars from the dead while the Neutral Gods remain diminished to the point of uselessness.

I have to say this book was a surprise as I didn't know what to expect within it but was pleasantly surprised to find a deep and coherent mythology built around the concept of an eternal war. All of the deities, many of whom are freakishly deformed despite their great power, are affected by the terrible conflict they've never not known. It's an interesting premise and one which I haven't seen before outside of, ironically, a few cartoons where the characters can be battling for millions of years. This is a serious story, though, with even the most benevolent among the deities considering humans little better than servants and uninteresting. The best of the gods fight for themselves, not mankind, while the worst just consider us food or sport.

I actually found myself more interested in the human characters of the story, Fiona and Zeke, who are a pair of teenagers kinda-sorta in love. There's some nice subversions with their all-too-human story before they get caught up in the conflicts of the gods like the fact Fiona is eager for sex while Zeke is scared. Watching the characters develop and their inevitable power-set emerge was interesting. I also liked how it wasn't a "Chosen One" narrative where one of them suddenly became stronger than the million-year-old beings around them.

The combat is excellent in the book with the clashes between the gods being huge and epic with weird connotations like in the old myths. They don't just fight with swords or guns but legions of dogs, living thunderbolts, and so on. Every surviving god is a seasoned warrior in a manner older than most Earth nations put together but that doesn't mean they don't die, often in surprising or shocking ways. The author isn't afraid to kill his characters and that adds to the brutality of the conflict.

Keeping track of all the players in the conflict was a bit confusing due to the fact all of them have multiple names but I eventually got the hang of it. I also liked how things were set up for sequels in a manner which didn't leave the book feeling too disjointed. I'm anxious to see where the author takes this series and give him my full regards. Grimdark urban fantasy is rare and while I'm not sure this quite qualifies, it's close enough for government work.