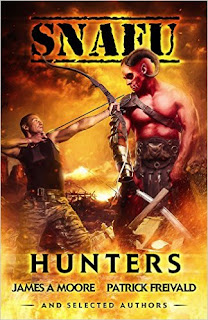 Military-science fiction is never going to die. Why? Because everyone likes risk and there's nothing higher-stakes than combat. It's also inherently fun to imagine conflict against cyborgs, zombies, aliens, demons, and all manner of creatures. There's a juvenile part of every science fiction and fantasy fan which loves to imagine how their favorite action heroes, militaries, or units would do against the creatures from another favorite work. SNAFU, military parlance for a chaotic mess, is an anthology series about how those kind of match-ups go horribly wrong for our protagonists and how they deal with it.

SNAFU: Hunters isn't the first of these books by Cohesion Press but it is the first of them I was recommended by a fellow writer and that I've picked up. I'm going to pick up more in the future. The short version of this review, which is going to be anything but, is the stories are of high-quality but mostly devoted to getting into the adrenaline pumping emotion of combat versus world-building. There's a few gems which truly transport you to other realities but most are there to give you a brief glimpse into a popcorn and soda fueled world of action-movie mayhem.

And I have no problem with that.

Part of what I like about these short stories and what I suspect I'll like about future volumes is they don't mind genre-blending or going over the top. We have alternative history, cyberpunk, horror, fantasy, science-fictioon, and supernatural tales all packed within. Many of these contain elements from the others. The only common denominator for them is they are stories about military operatives in a fantastic world with everything going to crap. This is a good book for those who enjoy stories of monsters, soldiers, and things falling apart quickly. I recommend it to fans of monster-hunting and mayhem both.

Here are my thoughts on individual tales:

A peculiar near-future story where humanity has augmented its armies with implants and cybernetics in a mixed-gender environment. I say peculiar because there's apparently been the rise of a cult of a Warrior Goddess among human female soldiers called the Our Lady of Slaughter. This element was distracting but interesting, albeit irrelevant, when our heroines are sent on a mission to destroy their previous model of cyborg. The protagonists are grossly unsympathetic blood-hungry psychopaths but that makes their gradual tearing apart all the more interesting. 8.5/10

Oda Nobunaga has taken over most of Medieval Japan and our protagonist is one of the survivors of the clans he's crushed into dust. However, said protagonist is one of the few remaining demon hunters left alive and is sought out by a Nobunaga loyalist in hopes of driving a demon out of his lord. The use of history and politics in this story was very good as well as the historial figure to cast as the villain. I especially liked the ending where things more or less play out as they had to despite the hope spot. 9/10

An interesting psychological look at soldiers who have stared too long into the abyss and what sort of questions that raises. In a bizarre way, I think of this story as taking place in the Doom universe. You have Marines regularly called upon to stop the forces of Hell but there is no sign of heaven in their works. I found the ending to be curiously uplifting and I've got to give the author real credit for this one. 10/10

"Only Stones in Their Place" by Christine Morgan

Journey back to the days of the Vikings and find out how they dealt with the hundreds of horrible dark things which existed just beyond the periphery of their lives. I liked the characters here who managed to endear themselves to me in a relatively short amount of time. I was especially fond of Valhild and her backstory, which I give the author props for including on the way to kill the monsters. A person who defies expectations indeed. 9/10

"That Old Black Magic" by James A. Moore

A story set during World War 2 being recounted by the now-elderly veteran where he talks about how one of his fellow soldiers took him on a mission to stop a Nazi occultist, only to find out just how far out of his depth they are and how he might have accidentally passed the horrors of the past down onto the next generation. While enjoyable, I was thrown out of the story briefly by a Transformers reference. 8.5/10

A group of SEALS during the Vietnam war get caught up in a conflict with a monster haunting the lands. I like the camraderie of the soldiers present as well as their eagerness to get into things before they have a full grasp of how bad things are about to get. Still, I could have used a stronger hook. I did like the barriers between the SEALS and their guide to the local monsters, though. 8.5/10

A tie-in to the Alpha Unit series, which I'm unfamiliar with but may check out. This follows a world which is being overrun by super-dangerous genetically-enhanced vampires being fought by Marines. During a testing exercise, a real-life "Taint" finds its way onto an SAS course and the trainees have to deal with it. This is probably my favorite story in the entirety of the volume. 10/10

"The Bani Protocols" by Rose Blackthorn

An interesting short story which feels like a tie-in to a larger epic. A group of monster hunters and sorcerers are fighting gigantic insects from another dimension in a world seemingly inspired by Stephen King's The Mist. I liked the twist ending which ties into the short story's themes about "what do you fight for?" 8/10

A Valducan tie-in story which is about a sect of monster-hunters which use special weapons to prey on demons. This is a fairly straight-forward story of a bunch of seasoned professionals killing a lot of monsters and I have to say I rather like it for that alone. The group is far less traumatized than most other hunters in this story and there's a more uplifting sense of triumph. 9/10

It's World War 2 on the Soviet front with a special division of the army being dispatched as, well, cannon fodder against the threat of the ghouls who were summoned during the beginning of the Revolution by the enemy. This is a dark, somber, but very well-told story with the ending being exceptionally powerful. 10/10

A nice tactical espionage, to quote the old Tom Clancy game, about a squad which deals with sink holes to other worlds. This is a common story trope in this book and this is a well-done example of the genre. The handling of the characters, the dark ending, and the mood are all exceptional even it didn't stand out as much as others. 9/10

Another favorite story from this volume, this is a novel which is set during Ancient Rome where the protagonists are part of a secret legion which hunts down the monsters which assail their empire. The very use of a common set of tropes in a new environment works well here and had me grinning, even when the protagonists were ruthless killers. This is a really great example of military-science fiction and I love it. 10/10

What happens when you combine the War on Terror with cybernetics. Bonked is the term for what happens when you have too much in the way of augments. Here, this is a story of a search for a terrorist which goes disastrously wrong. I have to say I found it quite entertaining and enjoyed how the protagonists recovered from each set-back. 8.5/10
Posted by CTPhipps at 7:14 AM