Dreams of Ivory and Gold review 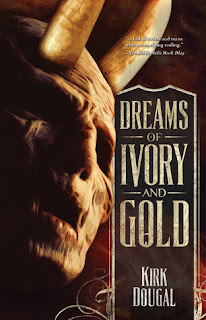 What did I think? If you're a fan of things like Seven or Fallen then you'll probably enjoy this book. It's a horror novel which plays with things like prophecy, faith, the interaction of the supernatural with "the mundane" world, and what it is like to be damned from birth as a half-demon. Make no mistake, this isn't an urban fantasy novel but one designed to terrify you with something just vaguely plausible if you're of a Judaeo-Christian bent.

The premise is an operative for the Vatican, failed priest Gregor Novara, is a cambion. The child of an incubus with a human woman, he is possessed of immortality and the ability to track down demons as well as his own kind. This is not a book about badasses or witch hunters, though. Gregor has no supernatural abilities beyond his strength, merely a will to kill as well as a connection to truly monstrous individuals.

The demons of this world are disgusting creatures which think only in the basest terms of sex, violence, and corruption. They are filthy beings who wallow in the worst of human emotion and are responsible for an endless number of serial killers, rapists, and worse across history. The book has numerous flashbacks from the Renaissance to modern day following Gregor as he hunts down the incubus in order to prevent it from siring monsters to help bring about the apocalypse.

The book doesn't actually spend much time in Gregor's perspective, instead focusing on Father Roger Greene and Detective Morgan Kelly who provide the "normal world's" perspective of Gregor. Their reaction to discovering he's on a mission from the Vatican to kill a supernatural being, for example, is to think he's either insane or an imposter. Also, to question the sort of values which would send an assassin out to kill supposed demonspawn even when they discover he's neither faking or insane.

Kirk Dougal has an excellent grasp of making realistic characters and, with the exception of Gregor, feel grounded. Moments like spending time with Detective Kelly's family or talking with Greene as he discusses how he's always been a "moral paragon" by avoiding temptation than confronting it humanize them as their lives get dragged into a surreal supernatural experience. They serve as the Watsons to Gregor's Holmes.

I'm actually pleased the author doesn't feel the need to make Gregor likable either. He's an obsessed old man, ancient by human standards, and singularly focused on destroying the things which brought him into the world. He's as much motivated by hate as faith with the latter serving as a thin barrier against the darker urges he hates within himself. The fact Gregor lives a celibate aesthetics's life to avoid any temptation, even those which normal people find God in, highlights what a razor-thin line he walks.

In conclusion, this is a book which would be entertaining for those who don't mind mixing Christian mythology with their horror. It's a dark serial killer story crossed with a conspiracy and magical realism one. The ending is particularly powerful as well as horrific. I heartily recommend it but caution it's not like Ragnarok's usual fair. Fans of the Spider and the Laurel would very much like it and they should be sold as a bundle in my view.