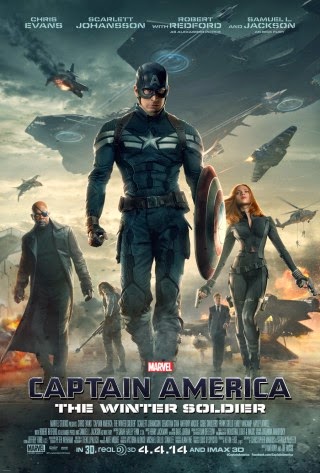 It's nice to have reminders that while Disney may definitely be on the side of the megacorporations when it comes to the inevitable cyberpunk breakdown of society, they're still capable of releasing socially relevant commentary in their movies.

If that strikes you as an odd opening to a review about a man covered in the stars and stripes who fights Nazis, I can point you to a hundred other reviews which are of a more "normal" discussion of superhero movies. I am not a normal reviewer, however, I am a die-hard comic book geek and fan of social satire in pop culture that will hopefully be buried with a copy of Neuromancer and Metal Gear Solid 2.

Captain America: The Winter Soldier, despite being a movie about a patriot superhero published by one of the largest corporations on Earth is a fun bit of satire from beginning to end. One so sly in its critique of American foreign policy you might miss it but there if you have the slightest skill at critical analysis.

The premise of Captain America 2 is Steve Rogers is adjusting to life after fifty years spent in an ice-cube and a world which has just suffered its first alien invasion. Yet, it's not nearly as different as some people would have him believe. The Good Captain is aware that people make nasty decisions when compelled by fear and he's acutely aware that rule by force isn't anything new. Indeed, tyranny is the oldest government known to man.

A good deal of Captain America: The Winter Soldier deals with a topic that is very controversial in American politics today and that's drone strikes. The problem with drone strikes isn't that they're conducted with machines and will inevitably give rise to the reign of Skynet. No, that's complete nonsense and why the so-called satire of the Robocop reboot was anything but. No, the problem with drone strikes is they're mass-produced obedient assassins and give the government of the USA a cheap, easy, and effective way to kill anyone they want.

In the movie Real Genius, starring a young Val Kilmer, the jackass anti-hero child prodigies of Not-CalTech have a crisis of conscience when they accidentally create an orbital satellite death ray. Their problem isn't the potential for mass destruction or even trouble with creating weapons. Their problem is the weapon they created allows the CIA to anonymously murder anyone they want at any time. It's a sniper rifle, not a nuke, but one aimed at every single person on the planet at once.

I won't talk about the specifics but Captain America deals with that sort of moral problem. That, in the name of security and fear from terrorism, SHIELD has the kind of super-technology which would make the heroes of Real Genius horrified. What if you could kill any bad guy you want at any time without any fear of retaliation or chance of being stopped? What if you wanted to use this as a deterrent?
Comic books have always questioned "why not just shoot the supervillains" and Nick Fury is nothing if not a voice for practicality in comic books. Captain America, however, has a serious problem with the idea not only could such power be used to kill the supervillains of the world but anyone they deem to be a potential one. It wasn't so long ago, indeed in my father's life, that many of the world's greatest progressives were considered dangerous radicals.

The funny thing is, this profound idea is introduced in the first fifteen minutes of the movie and becomes part of the background. It's always present, along with the idea of the world being monitored twenty-four seven, so that it remains in the back of a viewer's head while simultaneously not overwhelming the action.

Captain America: The Winter Soldier is about a guy who is about as anti-terrorist as you can possibly get, having fought the ultimate terrorists in World War 2, having serious questions about the similarities between his old foes and his current bosses. I initially had problems with one of the movie's twists but decided it underscored the movie's themes.

The funny thing is, despite the fact there's an explicit parallel between the bad guys and the Nazis, the movie is not heavy-handed in its handling of the subject. We have perfectly reasonable men and women like Nick Fury and Natasha Romanova believing that any threat to "ordinary citizens" should be dealt with using maximum force. Not because they hate freedom but because they want to protect it from those who would destroy it. It's just the movie is loud and clear that once you open that door, it's not easily closed.

Chris Evans' performance as Captain America blows the hell out of his ones in the first Captain America movie and Avengers and he wasn't bad in either. The new Captain is a hundred times more human, vulnerable, and reasonable while still remaining the center of what's good.

There's even a couple of inappropriate comments he makes which are just perverted enough to remind us he's flesh and blood. Even his fight choreography highlights what kind of person he is as he non-lethally disables as many terrorists as possible while his associates flat-out kill them, only resorting to more lethal force when innocents are endangered.

We get a good sense of how Captain America feels about his neighbors, his dating life, the 21st century, and a dozen other things. I daresay this Captain America movie is equal to the original Iron Man for giving us a definitive characterization of a comic book character. Kudos to not only Chris Evans but the writer, they have done a masterpiece here.

I've never been much of a fan of Scarlet Johansen's Black Widow, disagreeing with her casting choice. She's a beautiful woman, yes, but I never quite got the feel for the character from the comics. Scarlet Johansen takes the role for her own in this movie, making a distinct character from the comic book version I like a great deal. It also avoids setting her up with Steve, even if I think she's the best character suited for him (and vice versa).

Samuel L. Jackson's Nick Fury has always been an entertaining part of the Marvel Cinematic Universe but this is his best performance hands down. Seeing Nick Fury removed from his comfort zone as the Grandmaster of the SHIELD knighthood only to be racked over the coals in a way Jacques DeMorlay would pity is an awesome experience. He rebounds well, because he's Nick Fury, but it's a rough ride.

Anthony Mackie's character of the Falcon also turns a Marvel property I've never been very enthused about into something I adored. The Falcon has always struggled to distinguish himself from being Captain America's partner and, worse, has been part of some of the most unintentionally racist stories in comics. This version is a hero in his own right and one I would love to see as part of the expanded Avengers.

Strangely, I don't have much to say about the titular Winter Soldier. Despite being such an important part of Captain America's backstory (and the reveal is telegraphed far in advance), he doesn't have much of a place in the story save as the bad guy's heavy. Robert Redford and Emily Van Camp also give excellent performances, though the latter is somewhat wasted since her character is unneeded when there's both Colbie Smulder's Maria Hill AND the Black Widow.

Anywho, this movie is up there with Iron Man and Avengers for the best of the MU. It's also the most socially relevant.