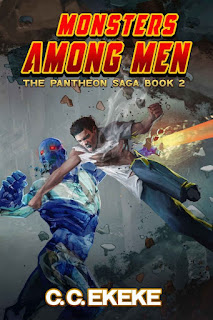 MONSTERS AMONG MEN is the second installment of the Pantheon Saga by C.C. Ekeke and a book that I immediately purchased after finishing the first one. This book was originally the second half of the first volume and manages to carry on the plot of Titan's murder as well as the development of its protagonists. The Pantheon Saga follows three individuals: new superhero Greyson, intrepid reporter Quinn, and teen powerhouse Hugo as they deal with the fallout from Titan's death.

The premise is that the world's greatest hero was killed by a magnetic pulse that gave him a stroke. His former archenemy, Lord Borealis, was arrested and is now set to be executed for the crime. However, there's ample evidence that someone else was responsible for the crime. Unfortunately, the Vanguard have closed ranks and are torn between believing the simple answer versus those who think it might have been one of their fellow superheroes.

This is a significantly stronger installment than its predecessor and I liked Age of Heroes a great deal. Basically, the stakes are higher and the character development is stronger. Several characters go in directions that I didn't expect and the book is all the better for it. Basically, the writer is not afraid to make characters irredeemable and redeem others that you wouldn't expect to be the good guys.

Greyson's story is the strongest in this book despite the fact it was the weakest in the previous one. A terrible disaster happens at the start of the book and it results in him becoming a wanted fugitive. His burning anger that he'd been using superheroism to sublimate doesn't go away when he's forced into retirement and the attempts to "help" him deal with his guilt only make things worse. I especially liked Lauren's "betrayal" as she thinks she's helping him but does something that is truly unforgivable.

Hugo's story is also fascinating as he is slowly lured into becoming a juvenile delinquent verging on supervillain due to the fact he's met a beautiful teenage girl that wants him to join her gang. His anger is every bit as deep as Greysons and the continued abuse he gets at school is slowly driving him insane. At any point, losing control could result in a lot of his (admittedly terrible) classmates being killed. It's a surprising source of tension.

Quinn's story is continuing her investigation into the death of Titan and the possibility that one of his teammates were involved. Sadly, I feel her story was the weakest of the three due to the fact both Greyson and Hugo suffer dramatic tragic events that change their lives. Quinn comes close but the story always seems to walk back the worst of the consequences.

The book reveals some of the darker side of superheroes with some explicit references to the #MeToo movement that makes the story all the stronger. It's not just that one of the superheroes is a complete scumbag but that his fellow "heroes" looked the other way while he was behaving in such a despicable manner. I felt that was distressingly realistic and it's well handled in this book.

This book wraps up most of the plotlines introduced in the first book and sets up the plotlines for the second. Really, if both of them had been combined into one book then it would be a straight 5 out of 5 for me. However, this does feel like the latter half of a larger book. Still, the action was good, the characters well-written, and the story entertaining.