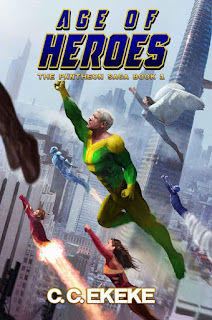 I'm a huge fan of superhero literature as anyone who knows anything about me can tell you. I was inspired to write my Supervillainy Saga series by such works as Soon I will Be Invincible and Confessions of a D-List Supervillain. Age of Heroes looked write up my alley with a supposed realistic look at life in a world where superheroes were celebrities struggling to deal with 24-7 media coverage.

The premise is that three individuals are deeply affected by the sudden inexplicable death of the hero known as Titan. There's Greyson, who worshiped Titan since childhood but has grown into an embittered adult, Quinn, who is an intrepid reporter that wants to break into the big leagues with coverage of Titan's death,  and Hugo a teenage boy that may have inherited Titan's powers. Each of them is an ordinary citizen, at least at the start, and provide a grounds' eye view of a larger than life person who fills the role of the world's greatest superhero.

These three perspectives provide an excellent view of the superheroic world, particularly after the world-changing event that is the loss of their Superman figure. Greyson has a father who hates superheroes and struggles with his own unfulfilling life that he could change by using the powers he's gained. Quinn wants to cover serious issues but is encouraged to examine all the trite and salacious details that the public wants over real investigation. Hugo constantly toes the line between wanting to use his powers for good and the devastation he could unleash on all the people who had wronged him.

I absolutely loved the world-building of this one. The world is just similar enough to our own to be good social satire with the handling of celebrities. People are interested in the sex lives, purity, and hook-ups of superheroes far more than their actual saving of lives. Images are also carefully maintained and managed to benefit them financially even when they are motivated by more selfless goals. The Vanguard, the setting's Justice League/Avengers, must manage their public perception because plenty of people are just looking for an excuse to tear them down.

My favorite story of the three main leads is definitely Hugo's. A fifteen-year-old deeply in love with a beautiful popular girl, he bends over backwards to do what she says in hopes that she'll come to like him. This story is painfully true to life and ends in a way that I feel is emotionally satisfying. I am very eager to see where his story goes and, for once, don't actually know whether it will be a tale of heroism or villainy. Quinn's story is a close second because it provides us the most insight into the Vanguard and their reality versus public perception.

My favorite supporting cast character is probably Seraph as she's a Supergirl-esque character that is the youngest member of the Vanguard. Expected to be a virginal and faith-based hero in public, engaged to Captain America-esque character Sentinel, she struggles under the public relations pressures that the others don't. These kind of little touches are excellent and help make the world more believable. She reminded me a bit of Starlight from The Boys and while I didn't like the comic, I enjoyed the Amazon version of the story that touches on the same themes.

The action is excellent throughout the book with numerous well-described fight scenes that make me think this would have worked well in comic book format. The action isn't the focus of the book but it is something that is integrated well. Besides, as this isn't a monthly comic, we can also see characters badly injured or outright killed. I also want to give the author a nod for diversity as this cast includes a wide range of races, sexual orientations, and other things that make it more realistic.

In conclusion, this is an excellent novel that I think works from beginning to end. If it has any faults, it's the fact the central mystery is not resolved at the end but carried over into the next book. For me, it was fine and I immediately purchased the sequel. This is not a self-contained story but it's a small issue for such a rich characterization-filled story.